The facial expression is highly influenced by the size or the shape of the nose so that even small corrections can deliver a great and pleasing result.

With nose corrections or rhinoplasty the size and shape of the nose can be changed as well as the tip or bridge of the nose.

Rhinoplasty is performed by releasing the skin from the underlying cartilage, which will be sculptured into the desired proportions.

In most cases the nose correction is performed by making an incision inside the nose to ensure that no scarring is visible after the operation.

The operation takes 1 to 2 hours.

After the nose surgery you can go home the same day.
During the operation nose tampons are used to stop the bleeding. These can not be removed within the first 24 hours.

The area around the nose might be swollen or oversensitive for a few days. In some cases patients are also required to wear a splint for one week.

The actual result of the operation can only be evaluated after a few months.

Some persons might desire a correction of the nose tip. This can be discussed during a consultation with the plastic surgeon. 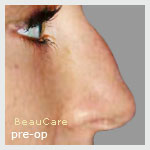 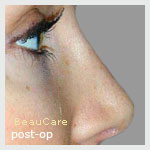 Here you can find pictures of nose reshaping

Discover the Clinic BeauCare in pictures

Clinic BeauCare uses cookies. Certain functionalities of the website of Clinic BeauCare are designed to offer you a better online experience on our website. They can only be applied by means of cookies. Take a look at the conditions.