As you become older, the effects of ageing are quick to show themselves on your face, plus the additional factors of gravity, sun exposure and stress take their toll. The skin is stretched, the jawline loses its straight contour and facial lines are drawn between nose and mouth. The skin around the neck also loses its elasticity and excess folds of skin might be formed.

A facelift can not stop the ageing-process but it can turn back the clock a little bit. It can also be performed in combination with other procedures like a correction of the nose or eyelids.

In case of a classical facelift, an incision is made in front of the ear which continues behind the ear.

The subcutaneous tissues (muscles and fat) are brought in a more youthful position. The skin is tightened and the excess is removed.

Afterwards you will be required to wear a bandage to reduce possible swelling and bruising. The bandage can be removed after 24 hours. 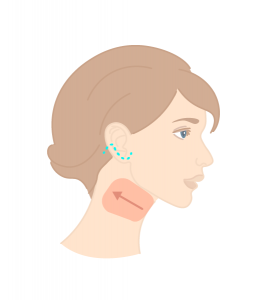 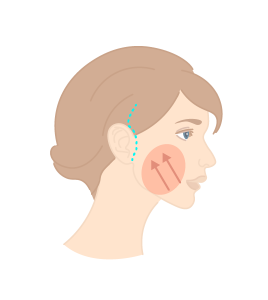 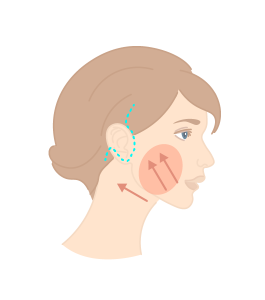 The actual operation takes more or less 3 hours. You can leave the clinic the same day.

For a few weeks you might experience some decreased sensitivity and tingling of the skin. But these will disappear spontaneously. The face will be swollen for some time. But after a few weeks of recovering, all complaints will disappear.

A facelift is meant to give you a more youthful appearance but this can not be done in spite of your personal outlook. Therefore the most natural result is aimed at, in performing the facelift.

It’s also important to realise that, as time goes by, a facelift will not stop the skin from stretching or losing its elasticity. But the effect is for life. If you have a facelift, you will certainly look better after ten years in comparison to the ones who didn’t have one.

A mini-facelift, so called S-lift, does not mean mini-result but mini-scar! With this procedure there will be only one small incision made around the ear.

The skin as well as the subcutaneous tissues (like muscles and fat) are tightened and the excess is removed. A mini-facelift takes about 2 hours and can be performed under a local anaesthetic. After the operation you will be required to wear a bandage around the head to reduce possible swelling and bruising. This bandage can be removed after 24 hours.

Mini-facelift also means mini-recovering period! You can go home the same day. The swelling will disappear after 7 to 10 days. And after one week you will be able to resume all your social activities.

A mini-facelift is meant to give you a more youthful appearance but this can not be done at the expense of your personal outlook. Therefore in performing a mini-facelift the most natural result is aimed at.

It’s also important to realise that a mini-facelift will not stop the skin from stretching or losing its elasticity as you grow older. A new mini-facelift can be performed after 5 to 10 years but the effect is for life. If you have a facelift, you will certainly look better after ten years in comparison to the ones who didn’t have one.

Sometimes, during the operation a mini-liposuction around the chin is performed.

A neck-lift might be considered as additional to a mini-facelift. This results in a facelift. 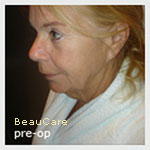 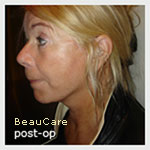 Here you can find pictures of facelift

Discover the Clinic BeauCare in pictures

Clinic BeauCare uses cookies. Certain functionalities of the website of Clinic BeauCare are designed to offer you a better online experience on our website. They can only be applied by means of cookies. Take a look at the conditions.